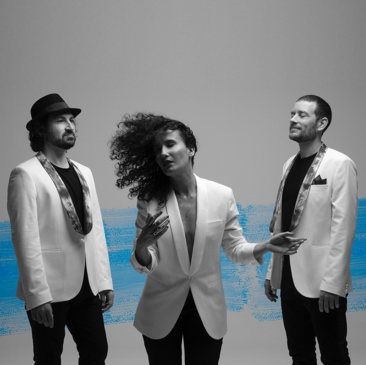 Three international musicians who joined their talents while living by the Mediterranean sea in Valencia, Spain. Nesrine Belmokh, a French-Algerian singer/cellist, Matthieu Saglio, a French cellist ‘with a thousand tone colours’ and David Gadea, a Spanish well rounded percussionist who was already touring with Flamenco and Jazz greats, personify the essence of NES. Their sound has been shaped by the richness and background of their lives and musical experiences, ranging from jazz to classical, soul and Arabic traditional music.
Their first album, Ahlam, recorded and mixed at the renown French studio La Buissonne, contains songs in english, arabic and french, full of grace and emotion. The album is named after one of the songs, ‘Ahlam’, which means ‘dream’ in Arabic. It expresses a personal dream of love fulfilled and of the desire for peace in the world. “There is no beauty without a concept of goodness” (translated excerpt from the song’s chorus).

The album was released in august 2018 with the legendary record label ACT.